Where have all the farmers gone?

I come from an agricultural background. My father was one of the few in the village who could complete his education and move to the city. But my grandparents are still farmers, so are my uncles and aunts and many of my relatives.

If you were to compare villages across India from 20 years ago to now, you would be surprised, shocked even. Farming has changed completely. A few years back, rice was the main produce in most parts of South India, especially in the state of Tamil Nadu. With time, farming, which is still a rain dependent activity, moved to cash crops due to inconsistent monsoons, especially in the rain shadow regions where I come from.

Cash crops like watermelon are now replaced with medicinal plants like Gloriosa Superba which is in demand commercially for its medicinal uses – but one plant during growth requires five litres of water every day. Labor has become expensive, lean and tough. With time, new techniques of agriculture have also become prevalent. But with that, so have the choices for farmers to take the easier route to making money – rent or sell their lands to corporates. Tamil Nadu has been one of the ideal places for wind energy investments owing to good velocity through the year. Many farmers from villages are leasing their farms to wind energy companies and urbanization is on the rise.

From rich, green gardens of paddy, you would now see rows and rows of windmills.

There is a shift that you see today, not just in India but across the world. Our generation and the one previous to ours have had abundance of earth’s natural resources. But are we going to leave enough for the generations to come?

The problem of ‘not so plenty’

As you read this, the world population is over 7 billion. This is expected to swell to over 9 billion by 2050. This is going to squeeze us all in much tighter than we already are – in trains, buses, classrooms, offices, malls and airports. But the number is ominous for another reason: we are going to need more land to grow food for all of us.

Land constitutes only 30% of the earth’s surface area. That’s 148.9 million sq km. That seems like a lot of land – and it is – until you consider how much is arable – only 19.2 million sq km. Now make that equation – today 7.3 billion people use 19.2 million sq km of arable land which leaves only one acre per person. By the time today’s new-born grow up, over 9 billion people will share the same land to grow the food we eat – rice, corn, water melons, oranges, walnuts and coconuts and everything else we have on our dining tables will be squeezed for space.

One more tiny observation – animals too will not have the luxury of large pastures and forests to graze and grow. Meat production is projected to double by 2020 due to increased per capita consumption globally which is directly linked to more land required for rearing cattle. India alone is projected to add around 400 million urban dwellers by 2050 and urbanization is on the rise all across the world. According to a Cambridge university-backed report, the UK could run out of land owing to increase in demands for food, housing and energy by 2030. Half the world’s wetlands have been drained, filled, planted, or paved, and fewer than 70 of the world’s 177 longest rivers (620 miles and longer) remain free-flowing, unimpeded by dams or other barriers. The situation is grim indeed.

Land has become scarce as indicated above but what about farmers who grow our food? Farmers across the world are aging and there aren’t enough new farming communities. According to the census in 2012, a third of US farmers were older than 65. The agriculture sector consumes about 70% of Earth’s accessible freshwater (which is only 3% of all water available on the planet) of which 60% of it is wasted and farmers are finding it difficult to cultivate with this shortfall. What if we have no farmers left tomorrow to feed us? 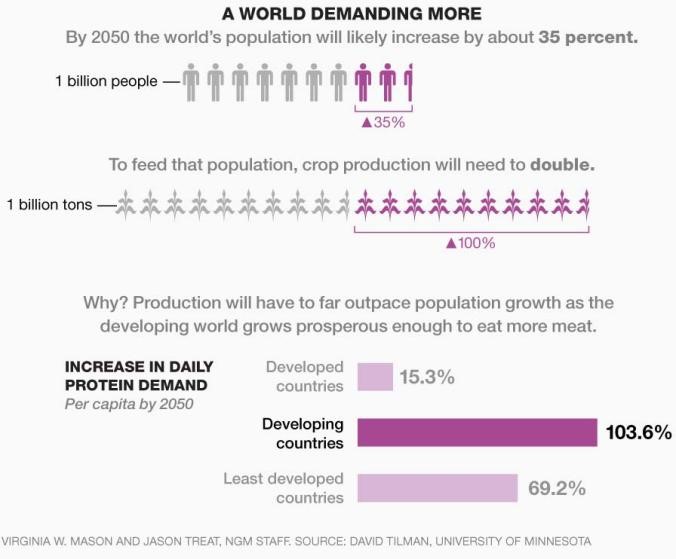 What if this trend continues? Are we going to leave the next generation strapped of all resources, including the people who feed us? Humans have been rash and time and again demonstrated short sightedness in using the earth’s resources. The center for biological diversity has established that 99% of currently threatened species of animals are at risk from human activities. In the past 500 years alone, about 1000 species have become extinct with dozens joining this list every day. Even plants are under threat. Under our watchful eyes, we have let the balance tip.

Every problem has a solution

Are we moving towards an irreversible situation? Not if we can help it. We can, if we want, make the earth a better place. The human mind is inventive – when it wants to be. We have managed to walk on the moon. Growing more plants to self-sustain should be a cake walk by comparison.

Take Ron Finley, the co-founder of LAGREENGROUNDS.ORG. The company plants gardens at low-income homes in Los Angeles as a part of a recovery system to transform neighbourhoods. He refers to himself as the ‘guerilla gardener’ as he uses lands that he does not have legal rights to. Ron uses everything from curb sides to traffic medians to abandoned houses to grow vegetables. That is how creative one can become.

Are there more solutions that all of us can follow in our small ways. Yes. I have listed a few innovative ways in which people are growing their own produce. I urge you to use this platform to discuss methods that are not listed here.

Consider an example from my rooftop. We grow just one vegetable but the best part about this vegetable is that it grows fast and gives enough output for us to even sell it if we want. Other popular choices include herbs, heirloom vegetables and gourmet greens.

Sustainable aquaculture is definitely possible and is developing fast but would take continued efforts from scientists, policy makers and governments to solve the challenges associated with it. I am sure once industrial techniques of aquaculture are perfected, they can be made available to individuals who find uses for them.

So, the big question is, can we do it? Yes of course – we need to come together and think of such innovative solutions and implement it on a large scale. We have enough new ways of overcoming the ‘what if’ challenges. But the time is now. Let us start making a small difference to create a big ripple. My personal goal in utilizing the small space we have is not just use the space but to grow food; food which is chemical free and gives me the sheer joy of watching life take root. We need to recognize that shortage of land and farmers could be a dire global situation which would definitely benefit from a global approach and solution and this article is just one way to start discussing solutions that might be feasible.