These countries eat the most meat

According to the OECD, the meat industry has a detrimental effect on the environment and our health, despite the employment and revenue it generates. Increasing meat consumption across the globe is linked to urbanization, a trend that is resulting in changing lifestyles and consumer habits.

The following table is created using 2013 OECD data on kilograms of meat consumed per person. The figures include values for beef and veal, poultry, pork and sheep. 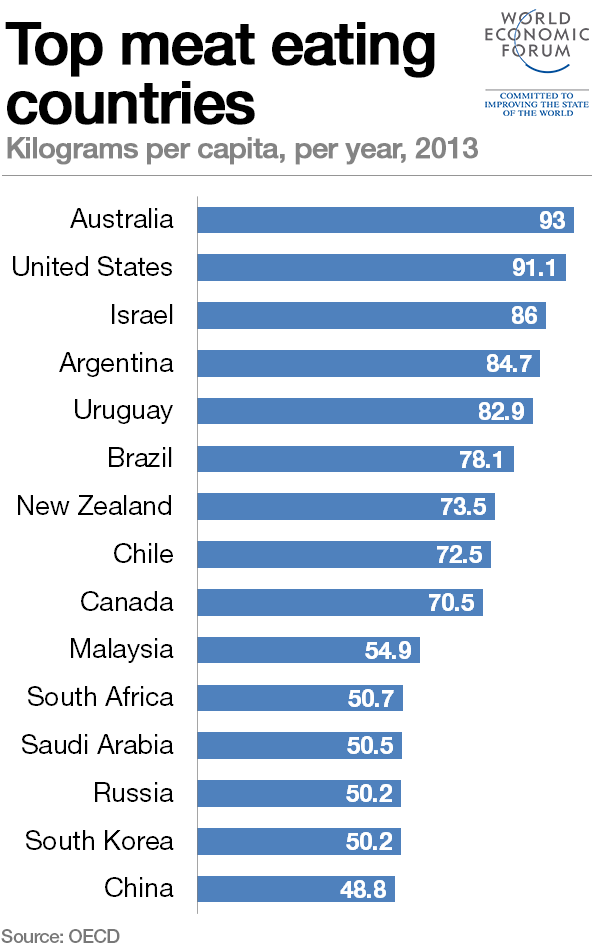 Australia tops the list, with each resident consuming on average nearly 100kg of meat a year – or around 250g a day. Second place goes to the United States, despite a very low value for sheep meat; they eat, on average, 8.5kg less than Australians.

This data is taken from the OECD-FAO Agricultural Outlook 2014. Meat consumption per capita is based on kilograms of retail weight, the weight at which the meat is sold.

Have you read?
Will eating less meat save the planet?
Food: how much does the world need?
Why we should all be vegetarians

How to stop degraded soil damaging food security and the climate

Soil degradation: Urgent action is needed to slow global warming and tackle food insecurity. Up to 40% of land has been degraded by poor farming practices.

Women-led start-ups are cutting out the middlemen between organic farmers and supermarkets, helping raise food security and improving farmers' lives.

Why technology without regulation won't save the forest