Central banks are increasingly using communication as an integral element of monetary policy. While initially financial markets were the main audience, in recent years there has been increasing attention paid to communicating with the general public. The reason is that the effects of monetary policy largely operate through expectations, and that the set of relevant actors also includes the household sector. For instance, expectations about the economic outlook can be an important determinant of the consumption and investment decisions that households make on a daily basis (Blinder et al 2008).

How do households formulate expectations, and to what extent do they use information on monetary policy in this process? Recent evidence finds that only some US households form expectations that are consistent with a Taylor rule (Carvalho and Nechio 2014). In forthcoming work, we corroborate this evidence, but use a more direct approach (Van der Cruijsen et al 2015). We use survey data to directly assess what households know about the monetary policy of the European Central Bank (ECB) and how they acquire their information.

A first conclusion in our paper is that households’ knowledge about the ECB’s policy objectives is far from perfect. The underlying analysis is based on a survey that we conducted among a representative sample of Dutch households. We presented participants with 11 statements on the ECB’s objectives, asking them to indicate whether they believed these statements to be true or false. Four of the statements are indeed true and based on the ECB’s actual objectives, while the remaining seven statements are false and were drafted by us.

Figure 1 shows the distribution of correct and incorrect answers for each of the statements. Only a few of the 11 statements are correctly identified by a majority of the respondents. The average number of correctly identified statements turns out to be less than five. In line with Bruine de Bruin et al (2010) and Carvalho and Nechio (2014) we find evidence for differences in knowledge across demographic factors. For instance, male respondents with higher levels of education and high social status are more likely to answers the statements correctly.

Figure 1. Distribution of correct and incorrect answers per statement 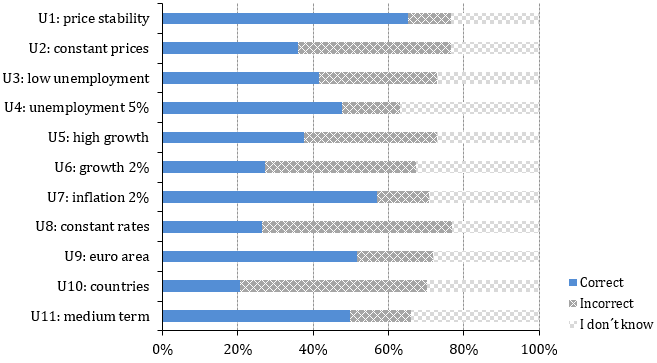 Source: Van der Cruijsen et al (2015). The figure shows the percentage of correct and incorrect answers for 11 statements on the monetary policy objectives of the ECB. The checkered light gray bars denote the percentage of respondents who answered ‘I don’t know’. Statements U1, U7, U9, and U11 are true statements.

The interest in monetary policy also varies greatly across respondents. On the one hand, almost two-thirds of the respondents indicate that being well-informed about the ECB is at least somewhat important to them. A major motivation is that people consider the ECB to be important for the economy. Very few respondents regard the ECB as important for their personal finances. At the same time, a sizeable portion of the public gives no clear indication that they want to have information about the ECB’s monetary policy. This implies that it will be difficult for the ECB to reach all members of the general public.

Turning to building people’s knowledge of monetary policy, we find clear evidence that the media channel is important. In the survey, we ask people to indicate whether they use sources such as newspapers, television or the Internet to acquire information on the ECB. We use this information in various ways to study the effects on knowledge.

For instance, following Blinder and Krueger (2004), we compute a measure for the intensity of information and a measure for the diversity of information. The first measure is the fraction of sources through which the person often hears about monetary policy, while the second measure is the fraction of media sources through which the person never gets information about the ECB. We use these two measures in a set of regressions that seek to explain variation in knowledge across respondents.

The two measures turn out to be highly significant, thus underscoring the importance of the mass media. We also find that respondents who use information have better knowledge on the ECB’s objectives than those 8% of the respondents who do not use any information.

A final conclusion of our paper is that knowledge on monetary policy is relevant for inflation expectations. We find, for instance, that the probability that respondents formulate realistic inflation expectations is strongly related to the number of correct answers they give concerning the ECB’s objectives. In addition, an additional correct answer corresponds to a decrease of absolute forecast errors of close to 0.10 percentage points. These results suggest that there are important returns to investments in knowledge on monetary policy, as the ability to formulate reasonable inflation expectations is important for adequate household financial decision-making.

Overall, the empirical evidence that has been accumulating suggests that households’ knowledge of monetary policy is quite fragmented. It is interesting that this conclusion emerges from two different studies focusing, respectively, on the US (Carvalho and Neicho, 2014) and the euro area (Van der Cruijsen et al 2015). Important areas for future work could be to extend these findings to a wider set of countries. Also, a further study of the heterogeneity in both knowledge of and interest in monetary policy would be useful for central banks that have the ambition of guiding the public’s expectations.

Disclaimer: The views expressed here do not necessarily reflect those of De Nederlandsche Bank or the Eurosystem.

Blinder, A S, M Ehrmann, M Fratzscher, J de Haan and D J Jansen (2008) “What we know and what we would like to know about central bank communication”, VoxEU.org, 15 May.

Van der Cruijsen, C A B, D-J Jansen and J de Haan (2015) “How much does the general public know about the ECB’s monetary policy? Evidence from a survey of Dutch households”, International Journal of Central Banking, 11(5), forthcoming.