Where are the women leaders?

Progress towards closing the gender gap in politics has been slow, according to data accumulated by UN Women. In fact, since 2005 there has only been a 3.5% increase in the global number of female ministers. Today, there are 715 female minsters worldwide; a mere 17.7% of government ministers globally.

There are currently 18 female heads of state, excluding royalty, half of whom are their nation’s first female leader. Sixty-three nations have had a female leader at some point in the past 50 years.

The need to accelerate progress is being taken seriously around the world. Prime Minister Shinzo Abe, for example, has pledged to increase female representation in Japan to 30% by 2020, while UN Women has suggested that “women’s political empowerment and equal participation in political decision-making are likely to feature in the new sustainable development agenda taking over from the Millennium Development Goals this year”.

So, which countries have an elected female head of state? 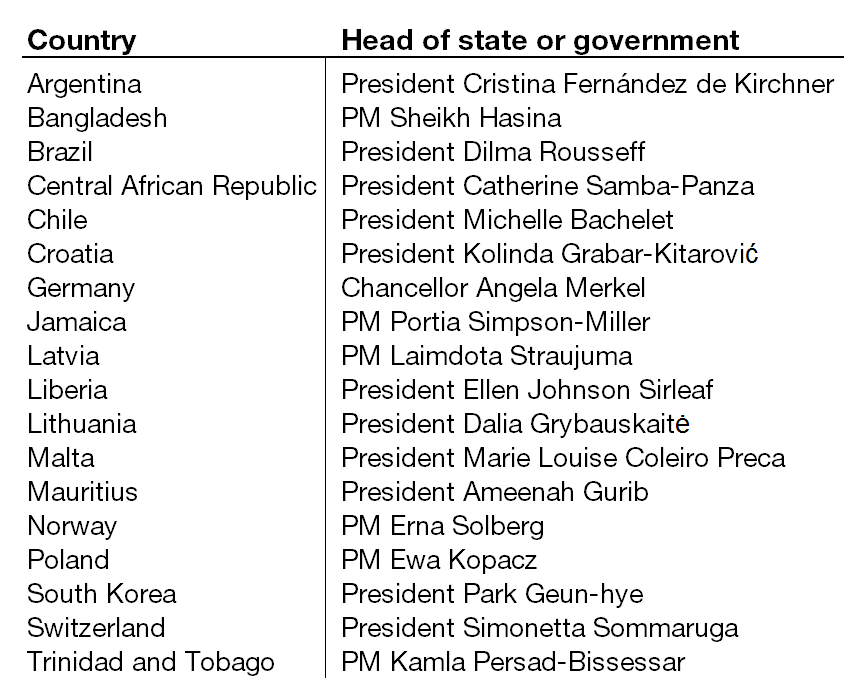 Have you read?
15 women changing the world in 2015
How can women climb the leadership ladder?
5 traits of emotionally intelligent leaders

Image: Simonetta Sommaruga, President of the Swiss Confederation and Minister of Justice and Police looks on during the ‘Welcoming Remarks and Special Address’ at the congress centre during the Annual Meeting 2015 of the World Economic Forum in Davos, January 21, 2015. WORLD ECONOMIC FORUM/swiss-image.ch/Photo Michele Limina

A recent report examines the effect of CEO gender and minority status on the size of the compensation gap between a firm’s CEO and its average worker.

What is the state of gender equality at the Tokyo Olympics?