Which countries have the most organic agricultural land?

Organic goods are an increasingly popular consumer choice across the world, as people respond to the reported health and environmental benefits – according to the Research Institute of Organic Agriculture (FiBL), the value of organic goods sales reached $72 billion in 2013. However, which countries devote the most land to organic agriculture?

The data in the following graph is taken from the FiBL and the International Federation of Organic Agriculture (IFOAM), and shows the countries with the largest areas of organic agricultural land in millions of hectares and as a percentage of their total agricultural land.

Countries with the most organic agricultural land (2013) 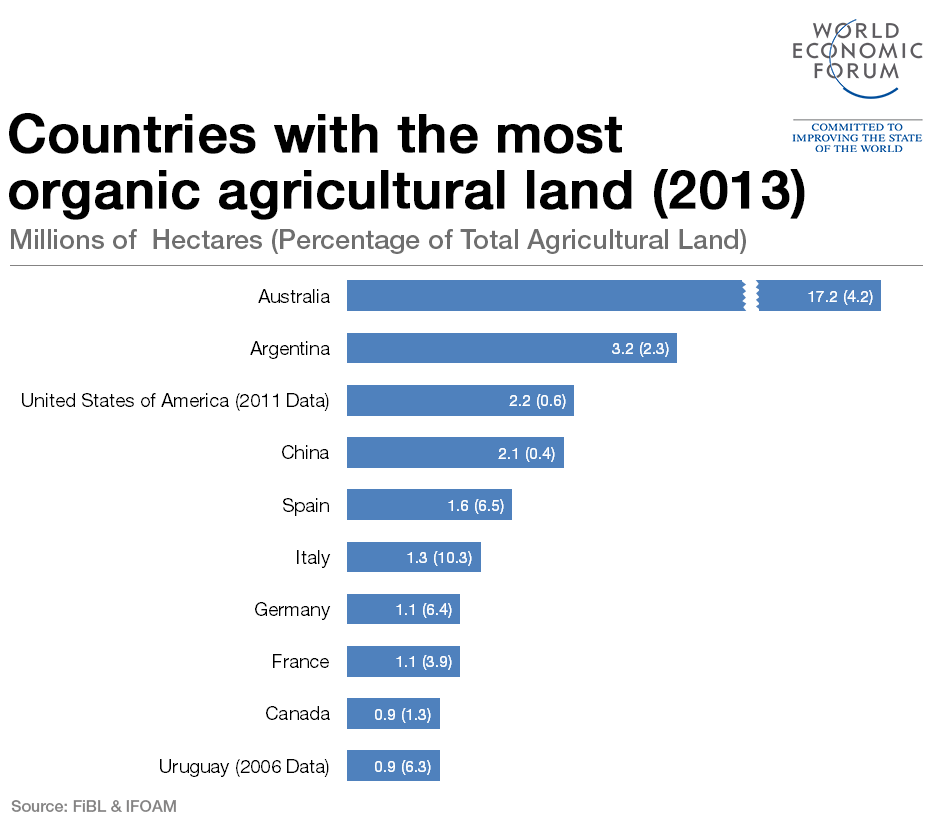 This data is taken from the FiBL and IFOAM’s The World of Organic Agriculture: Statistics and Emerging Trends 2015 report. Organic agriculture area represents certified organic land/areas that are fully converted, as well as land currently under conversion. Australia has the largest area of land devoted to organic agriculture, a staggering 17.2 million hectares, 14 million more than Argentina in second place and roughly equivalent to the total land area of Uruguay in 9th. As a percentage of total agricultural land, Italy devotes the most land to organic production, at 10.3%. Other European nations also feature in the top 10 – Germany and France both have 1.1 million hectares of organic agricultural land.

This data was sourced from Organic World.net.

More on Governance for Sustainability View all

Companies can use the ESG Book at no cost to disclose, manage and keep ownership of their ESG data in real-time.

When Mississauga decided to replace an old coal mine with a gas-powered power plant, residents protested for redevelopment to a 15-minute sustainable city.

What is ‘wishcycling’ and why is it a problem for the circular economy?

Why scaling investment is crucial for sustainable development

This is what stops people from recycling more, finds a global survey