How can we save the world’s marine species?

Now you see them, soon you won’t.

Almost half of all populations of marine animals with a backbone have declined in just 40 years, according toa report released Tuesday by the World Wildlife Fund.

Not only that, but nearly a third of the world’s fish stocks are being overfished, and three-quarters of the world’s reefs are threatened by global warming and ocean acidification.

If these trends continue, all coral reefs could be gone by 2050, the researchers said.

A report last year on trends in worldwide animal populations, known as the Living Planet Index, saw a 52% decline in the world’s vertebrates from 1970 to 2010.

Now, scientists have compiled a similar report for marine species and found a picture that’s similarly bleak. We’ve lost 49% of these populations — just about half of all the animals with backbones in our oceans — from 1970 to 2012.

The sharpest decline occurred between 1970 and the mid-1980s, then marine vertebrate populations were stable for a while. But more recently, these populations have been falling again, largely due to human activities, as the chart below shows: 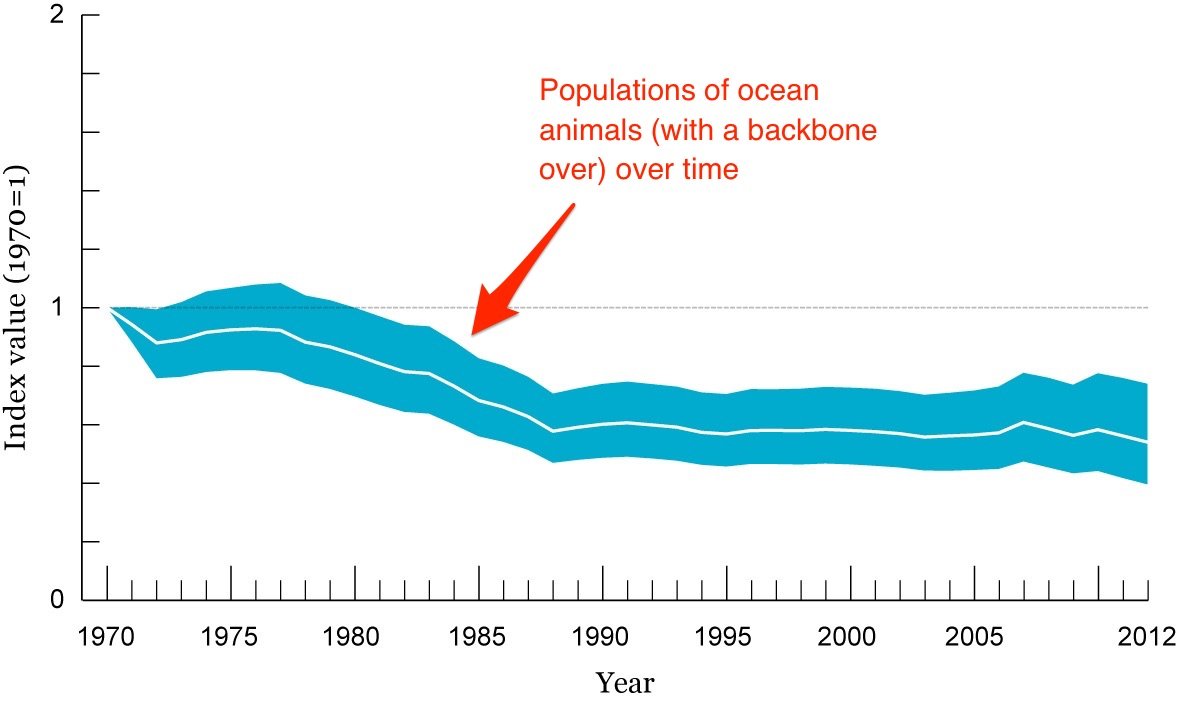 But ocean vertebrates have fared better in some parts of the world than others. Their populations have been increasing from previously low levels in northern latitudes such as the Arctic, but falling in tropical and subtropical regions, such as Fiji.

Fish are among some of the hardest-hit species, the report found. A group of fish that includes tuna, mackerel, and bonito has declined by nearly 75% over the past 40 years.

In addition, about one in four species of sharks, rays, and skates are currently threatened with extinction, primarily as a result of overfishing.

According to the report, the decline in ocean life is primarily driven by human activities, including overfishing, habitat destruction, and climate change. This is bad news for the 3 billion people who depend on fish as a major source of protein.

More than a quarter of all marine species live in coral reefs, and yet they cover less than 0.1% of the ocean — an area about half the size of France. About 850 million people benefit economically, socially, and culturally from these reefs.

Many marine ecosystems are interconnected, so what happens to one group of species also affects many others, the researchers said.

“The good news is there are abundant opportunities to reverse these trends,” Brad Ack, senior vice president for oceans at WWF, said in a statement.

The report outlined several solutions to the problems, such as protecting marine habitats, managing and improving fishing practices, and directing more funding to these efforts.

There may be an opportunity to act later this month, when world leaders converge on New York to discuss the UN’s Sustainable Development Goals.

Author: Tanya Lewis is a science reporter at Business Insider, specializing in the intersection between biology and tech.

Image: A Green Sea turtle swims over a reef near the surf break known as ‘Pipeline’ on the North Shore of Oahu, Hawaii. REUTERS/Hugh Gentry

To keep global warming below 1.5℃, we need to find new ways to produce everyday goods, many of which have been built on the back of fossil fuels.

How investors can achieve net zero, help end deforestation and save the Paris Agreement

There is huge potential for retail investors to drive a powerful trend for net zero portfolios, starting today.

Panel unveils 10 guiding principles in campaign to revive the Earth

This idea could change how we travel

How marsh grass could help protect us from climate change