Rich countries gave more than $130 billion to official development assistance in 2014. Over the last five decades, western donors spent $4.14 trillion – the equivalent of more than seven times the 2014 GDP of Nigeria. These flows are topped up by support from non-governmental organisations and other private charities, and so-called new donor countries. Yet, in many of the developing countries receiving the aid, poverty still looms large, and underdevelopment persists.

The apparent lack of any correlation between the amount of foreign aid a country receives and its per capita rate of economic growth, in particular, has fostered vigorous debate among economists about whether or not aid is effective. Despite a large number of academic articles, this literature has not reached a consensus. Researchers seem divided into ideological camps, each fighting for their model, with one group claiming to show that aid works, and the other group pointing to a lack of robustness of these results. The earlier literature is far from providing causal estimates on how aid affects growth but rather shows (the lack of) correlations between the two. However, studying correlations alone can hardly provide insights – after all, aid could go to where growth is low or, as well, where good policies make future growth more likely.

Attempts to estimate the causal effect of foreign aid on growth can be divided into four groups, all aiming to identify variables that affect growth only through aid (and use them as instruments for aid). One group relies on variables that are based on the size of the recipient country’s population to predict how much aid a country receives (e.g. Rajan and Subramanian 2008), a second uses past values of aid to predict current ones (and estimates difference or system GMM regressions, e.g. Minoiu and Reddy 2010), and a third predicts aid with the recipient’s political connections to their donors (e.g. Bjørnskov 2013). None of these strategies meets their goals. Population size affects growth through other variables than aid, like foreign direct investments or trade (Bazzi and Clemens 2013). Lagged aid can affect growth directly, even holding contemporaneous aid constant. And while political connections can be helpful to estimate the causal effect of politically motivated aid (the local average treatment effect, or LATE), there is little reason to be confident this effect could be generalised to represent those of aid in general.

Political motives of donors and aid

As we explain in Dreher et al. (2014), there are reasons to assume that the motive for giving aid affects the outcome. Among them, favoured countries get approval for aid projects of low quality that would not have been approved otherwise. What is more, political interests can reduce the motivation of the donor and recipient to invest in projects to make them most successful and to enforce the conditions that had been attached to the aid.

Figure 1 gives a hint of the political motives donors might have. The figure shows that countries of particular geo-strategic importance – measured by their presence as temporary members of the United Nations Security Council (UNSC) – receive substantially more aid than other countries, and get almost twice the aid the same countries receive before they enter the UNSC. This relationship holds in more rigorous settings, highlighting the importance of vote-buying in international organisations as one important motive for giving ‘aid’. 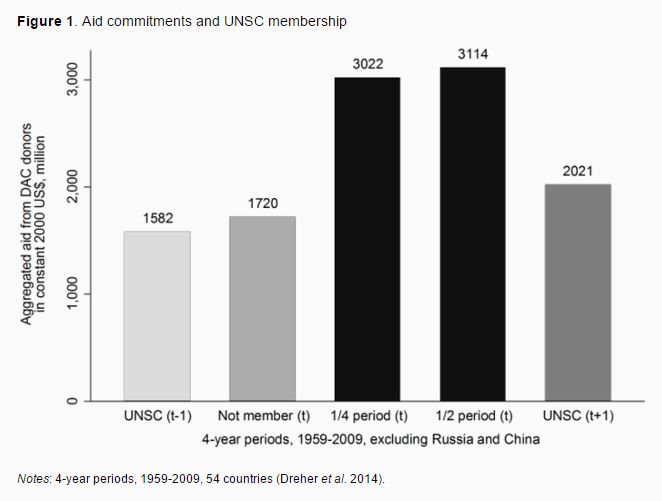 We exploit the increase in politically motivated aid the temporary members receive and analyse the effectiveness of aid as their UNSC membership changes, relying on previous research that shows membership in the UNSC to be unaffected by aid. Figure 2 summarises the results of our econometric tests.

As the effect of politically motivated aid (the local average treatment effect, if used in an instrumental variables setting) is different from that of other aid, we conclude that political connections between donors and recipients are unhelpful in identifying the broader effects of aid on growth.

Notes: The left figure shows the effect for non-UNSC members and the right figure those for UNSC members. Bold lines show marginal effects and dotted lines the 90% confidence interval. Growth regressions are based on four-year periods, 1959-2009, 54 countries (Dreher et al. 2014).

The effect of aid in a difference-in-difference setting

The fourth, more recent group of studies tries to estimate the causal effect of aid in a difference-in-difference setting. These studies predict aid based on a combination of variables that affect the amount of aid a donor gives at a particular time and the probability that such aid is allocated to a particular recipient country (netting out the effect of aid amounts and the probability of receiving aid themselves). Werker et al. (2009), for instance, make use of oil price fluctuations that substantially increase the aid budgets of oil-producing Arab donors, in particular to Muslim countries. Nunn and Qian (2012) use weather variation in the US and its effect on US-food production as an exogenous shock on the domestic ‘overproduction’ that is being sent to developing countries as food aid. They assume that the bulk of this increase is likely to go to countries with a high probability of receiving aid, which they proxy with the share of years a country has received aid over their sample. The identification strategy thus relies on how years with different wheat production translate to differential outcomes in recipient countries with a high probability of receiving aid compared to countries with a low probability.

In Dreher and Langlotz (2015) we apply a similar methodology to a large number of donors and recipient countries (and focus on growth rather than conflict). Our interaction is between donor government fractionalisation and a country’s probability of receiving aid. Government fractionalisation leads to larger government budgets (see Figure 3, which shows a partial leverage plot that nets out the effect of other variables), while larger expenditures lead to an increase in the aid budget (Figure 4). The increase in total aid then translates in recipient-specific aid, with some countries having a higher probability of benefiting from the increase compared to others. Following the study by Nunn and Qian (2012), we proxy this probability with the share of years a country has received aid over the sample period.

We thus compare the effect of aid on growth in regular and irregular recipients of aid as donor fractionalisation changes.

We provide a number of explanations.

We develop this idea in Dreher and Lohmann (2015). We are inspired by Galiani et al. (2014), who show that developing countries that pass the International Development Association’s (IDA) threshold for receiving concessional support receive substantial reductions in aid more broadly. Again, we rely on a combination of variables that shift the amount of aid available over time and the probability of the aid going to a particular location. Specifically, we interact whether or not a country has passed the IDA’s income threshold with the sub-national regions’ probability of receiving aid. We thereby compare regular aid recipients to irregular recipients as the recipient country’s IDA status changes (netting out the effects of how the change in status affects the whole country and variables that are specific to each sub-national region). We use geo-coded data for World Bank aid to sub-national regions of various size and find no significant effects of aid on growth (measured as night time light growth) at the regional level either.

We conclude that there is no robust evidence that aid affects growth. Of course, this does not imply that aid is necessarily ineffective. Much of the aid is not given to affect growth in the first place. A large share is given as humanitarian aid following disasters. Parts of aid are given to fight terror, please political allies, or influence decisions in important international organisations. As we have discussed above, the motive can affect the outcome. Such aid thus cannot be expected to increase growth but should instead be evaluated with its own goals in mind.

For a brighter future, Japan must invest in youth, generate good jobs and ensure healthy and productive longevity for the world's fastest-aging population.