Where are the world’s most globalized countries?

The KOF Swiss Economic Institute has released its index of the world’s most globalized countries, and Ireland finds itself at the top of a list that is decidedly European. Of the top 15 countries on the list, only Singapore, which ranked fourth, and Canada, which ranked 12th, are outside of Europe.

So how exactly were these rankings calculated? KOF’s Index of Globalization ranks countries based on three key dimensions: economic, social and political. The index is calculated using data referring to actual economic flows, economic restrictions, data on information flows, data on personal contact and data on cultural proximity. 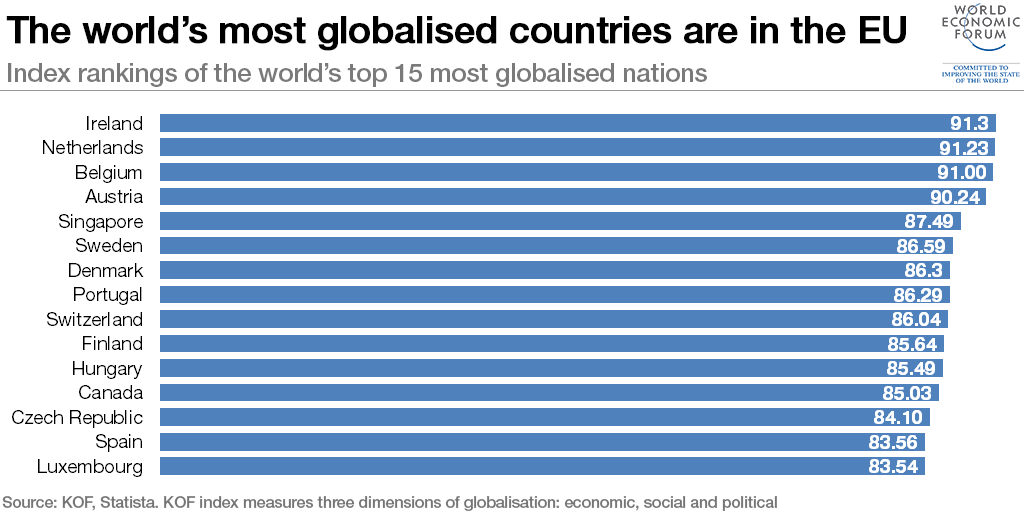 The Czech Republic is the only country to appear in the top 15 that did not appear in the 2014 edition of the list. It comes in at number 13, switching spots with Cyprus which falls to number 16.

The complete rankings can be found at the KOF website.

Have you read?
Has globalization made corruption worse?
Are we heading towards a de-globalized world?
How are universities adapting to globalization?

Image: A man walks past buildings at the central business district of Singapore. REUTERS/Nicky Loh

Major European cities, like Paris and Brussels, have reduced their speed limits, in a continent-wide effort to reduce pedestrian deaths and emissions.

3 things to know about books and reading in Europe