Which economies are best at protecting their environments?

Placing areas under environmental protection helps in the fight against climate change, but it also shelters ecosystems, improves food security, acts as a natural barrier against disaster, serves as a genetic bank for biodiversity and scientific research, and plays an important role in society and culture.

A 2014 report by the United Nations Environment Programme (UNEP), Protected Planet, revealed that 15.4% of the world’s terrestrial areas and 3.4% of oceans now enjoy legal protection.

The UN Global Goals for Sustainable Development, which were launched in September 2015, aim to increase that number by conserving at least 10% of coastal and marine areas by 2020, and by enforcing international obligations regarding the protection of land such as forests, wetlands, mountains and drylands.

The latest World Bank data below shows the combined percentage of protected terrestrial and marine areas per economy in 2012. (Countries under 1,000 square kilometres are not included.) 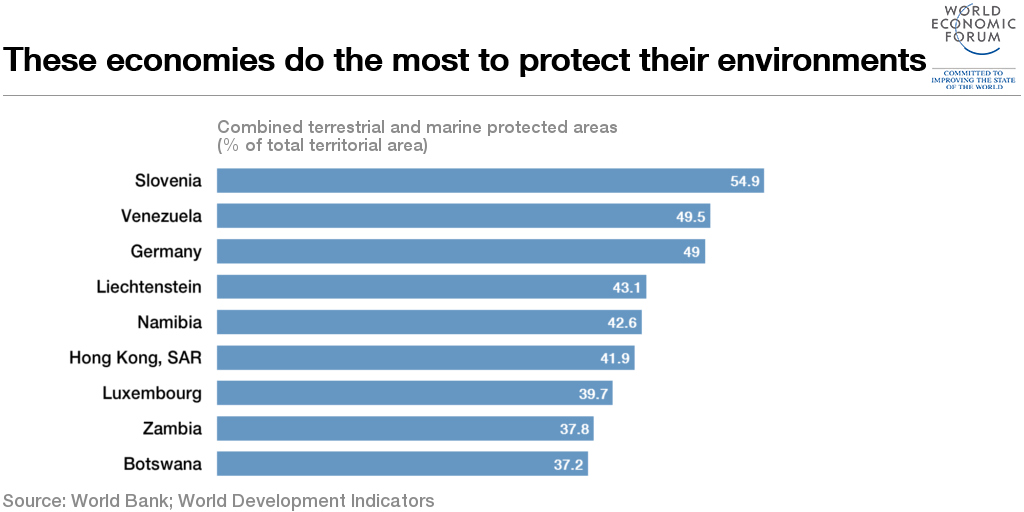 Mountainous Slovenia protects more than half of its territory (54.9%), which equates to an area of nearly 11,130km2.

Venezuela, in second place, is one of the most ecologically diverse countries in the world, but has suffered severe environmental degradation. The country has made great strides in protecting its natural environment through environmental regulation, and leads the way in Latin America.

Germany, which recently announced it would be transforming 62 former military bases into wildlife sanctuaries, comes third.

Three sub-Saharan African nations – Namibia (fifth), Zambia (sixth) and Botswana (ninth) – have taken steps to preserve their natural heritage, which has both protected local cultures and wildlife, and paid dividends through their safari-tourism markets.

Other European micro-states, Liechtenstein (fourth) and Luxembourg (seventh), also feature in the top 10. Although almost all of Monaco’s territory (98.4%) is protected, it is not included in the ranking because the tiny state is only 2.2km2.

Hong Kong SAR, China (sixth), which has engaged in extensive green policies pioneered by its environmental protection department, is the only region in Asia to be featured.

Have you read?
Why farmers are key to conservation
Which countries best protect nature for tourism?
How Africa’s rangers save wildlife – and us

Image: A woman jogs with her dog through a park, October 14, 2014. REUTERS/Stoyan Nenov