How can we improve solar energy efficiency?

One way to improve the efficiency of solar panels is to place them where clouds can’t interrupt their energy production. Even in the sunniest parts of the world, clouds can still cause fluctuations in energy output. So what better place to put solar panels than above the clouds?

The idea is not without major hurdles, but some energy scientists think it’s worth trying. Researchers at NextPV—a multinational lab jointly operated by France’s CNRS and the University of Tokyo—are developing solar panels attached to high-altitude balloons that would hypothetically float 20 kilometers (12.4 miles) in the sky. That’s well above where most clouds reside.
“Anywhere above the planet, there are very few clouds at an altitude of 6 km—and none at all at 20 km,” writes CNRS French director Jean-François Guillemoles, in an article on the lab’s website. “As the sky loses its blue color, direct illumination becomes more intense: the concentration of solar energy results in more effective conversion, and hence higher yields.” 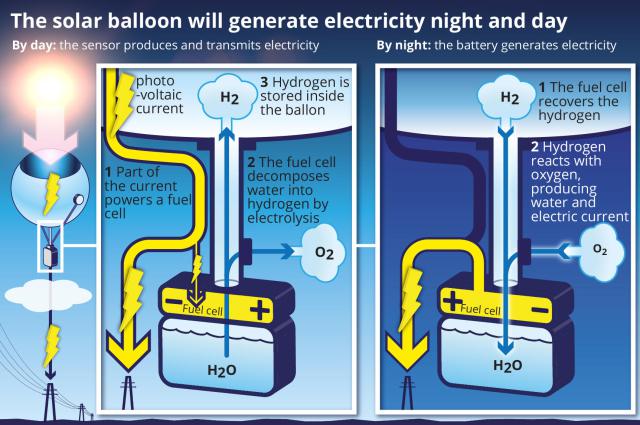 There’s little doubt that these high-flying solar panels would be moreeffective than ground-based ones. The larger question is whether or not the idea is feasible from a financial or even practical perspective.

The main obstacle, as it often tends to be, is cost. It’s unlikely such an elaborate project could ever shrink its costs down to an amount comparable to normal solar power (already below $1 per watt and estimated to reach as low as 25 cents per watt within a decade).
But let’s assume high-altitude solar panels can be designed, constructed, implemented, and operated at costs similar to regular solar panels that just sit in a field or on a roof. There are still other problems. At altitudes that high, the pressure could mess with the hydrogen that the balloon produces to keep itself afloat. The balloons—which are moored to the ground via very long cables—could also pose safety problems for pilots, as well as Earthbound citizens, should one of them come crashing back to the ground. And for all their potential benefits, the balloons still wouldn’t solve the problem of what to do at night, when the sun isn’t shining at all.
A seminar on the project was held in November at the French embassy in Tokyo, and NextPV is looking into launching a prototype. It’s an interesting idea, but it may ultimately remain just that—an idea. Solar energy has gained momentum globally because it’s relatively easy, cheap, and getting cheaper. High-altitude balloons could make solar cells more efficient, but perhaps at the expense of common sense.
Publication does not imply endorsement of views by the World Economic Forum.

Author: Adam Epstein is a reporter for Quartz, covering the future of television and its reverberations throughout business, technology, and culture.

A new study suggests that a robot might reduce feelings of embarrassment when, for example, booking sensitive medical appointments.

How much screen time is too much for children?

What Miles Davis tells us about AI