What gaming can teach us about food security

I just spent 10 years dealing with some of the worst food shocks in world history. It began when El Niño obliterated crops in Australia and India, and drought struck North America. America’s farm belt was hit by floods just a couple of years later. I watched with dismay as food stocks fell and prices skyrocketed. Countries eased environmental laws to help farmers maximize yields, yet food security still dipped across Africa, Europe and Asia. Some nations crumbled under the weight of civil unrest and hunger.

Then things got really bad.

Fortunately, all of this actually happened over the course of two days this November. It was a game.

More precisely, it was a simulation called Food Chain Reaction. Together, WWF, the Center for American Progress, CNA Corporation, Cargill and Mars produced the event to see how real people from around the world – policymakers, business executives, scientists and researchers with deep experience working on food and agriculture issues – would respond to a decade-long series of agricultural, economic, and political events. Sixty-five experts across eight teams gathered in WWF’s US headquarters, to play the role of nation states, multilateral institutions, and businesses. Like wizards behind the curtain, an independent set of experts determined how the rest of the world would react to the players’ moves.

The precise details of the exercise – in which rivers flooded, crops failed, and societies collapsed – will almost certainly never come true in this exact combination. It is a near certainty, however, that climate change will have a significant impact on the planet and our daily lives. Temperatures will keep rising, shifting climates will depress food production in the world’s fastest growing regions, and social unrest will likely follow.

In many ways, it is the human element of climate change that is one of the greatest unknowns. The physical science is clear, but the social science is not. Serious games like Food Chain Reaction can provide insights to help us prepare for the future, or – as the game’s designers put it – the new normal.

The game was informed by previous food shocks that were exacerbated by climate change and spurred humanitarian crises. In 2007 and 2008, for example, wheat shortages in Russia and China drove up food prices in Egypt and other already fragile societies, triggering riots in many and pushing some into revolution. Researchers at the New England Complex Systems Institute identified more than 30 “food riots” and protests in the wake of food-price spikes in 2008, leading to thousands of deaths. They further warned that chronically high food prices “should lead to persistent and increasing global unrest.” 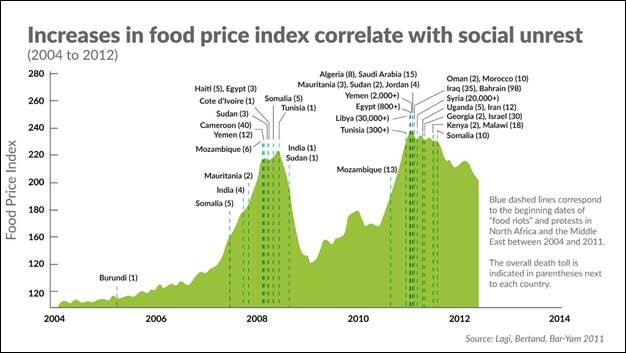 Food production is not only made vulnerable by climate change, but it also drives climate change. According to the World Resources Institute, agriculture is responsible for 24% of all human-caused greenhouse gas emissions. The UN’s Food and Agriculture Organization estimates that we’re using about 38% of the planet’s land to produce food. Agriculture is the driving force behind deforestation, which releases more carbon into the atmosphere and leaves fewer places to reabsorb and store that carbon where it feeds plants instead of heating the atmosphere.

By 2050, the world’s population will exceed 9.7 billion people and the demand for food will double. Rising incomes will boost demand for resource-intensive meat. The planet cannot bear this strain on its current course.

As world leaders gather in Paris for COP21 – the 21st such gathering to tackle climate change – it’s critical that they take meaningful steps to minimize both climate change’s impact on agriculture and agriculture’s impact on climate change. This means making the entire food system deforestation-free, promoting soil health as a tool to store carbon and protect water, preventing food waste, and using unavoidable waste – from manure to banana peels – to generate energy, biomaterials and other products.

Many important stakeholders are emerging as climate leaders. More than 150 countries – accounting for 90% of global emissions – have already made national climate commitments to slash their carbon pollution going into the talks. Companies including Cargill, McDonald’s and Walmart have signed onto the New York Declaration on Forests and pledged to eliminate deforestation from their supply chains. Consumers, too, are increasingly demonstrating their preference for food that is produced in harmony with nature.

We are heading in the right direction. Now we must move further, faster.

During the game, we didn’t keep score. There were no winners or losers. But the outcomes will provide us with some forthcoming lessons. In the meantime, the game made clear that, in order to survive future food shocks, everyone is responsible – the public and private sectors, institutions to individuals – for building a climate-smart, resilient, and sustainable food system.

COP21 is the next stop on this journey. More governments, businesses, consumers and others need to get on board and accelerate our progress. Food security and climate change is no game, so the sooner we can join together as a unified team, the brighter our future will be.

Have you read?
Can eating less meat really tackle climate change?
What are vertical farms, and can they really feed the world?
Why the world’s hungry are most at risk

Image: A woman holds up cauliflowers at a stall inside a market in Shanghai December 9, 2011. REUTERS/Aly Song

Demand for blue food is expected to double by 2050, which will have environmental and social implications. The world needs sustainable aquaculture systems.