How can we improve attitudes towards the transgender community?

The key to stopping Alzheimer's, according to Bill Gates

This article is published in collaboration with Thomson Reuters Foundation.

What do an American comedian, a British boxing promoter and a Norwegian ex-submarine captain have in common? What sounds like the opening line of a joke is no laughing matter.

Sarah Franken, Kellie Maloney and John Jeanette Solstad Remø share the confidence and charisma to captivate and inspire, whether it be an audience, a boxer or a crew, but what sets these women apart from most is something far more significant.

The three women were born male – and spent most of their lives struggling with the fact that they identified as female.

Growing up in a world where the term transgender did not exist, they felt compelled to suppress their feelings, shoulder a solitary burden and, ultimately, go through life living a lie.

Franken, Maloney and Remø have all transitioned in recent years and spoke to the Thomson Reuters Foundation this year for the series Transgender Lives, which also features interviews with a police officer, an actress and a Kenyan activist.

From reflection after recovering from a drink and drugs problem to a moment of clarity after a suicide attempt, the motivation behind their decisions to transition vary greatly.

“I got very light-headed as I kept popping pills and I thought ‘This is all going to be over soon… I’ll be out of everyone’s lives’,” said Maloney, who shortly after quit boxing, started her transition and came out to her two young daughters. 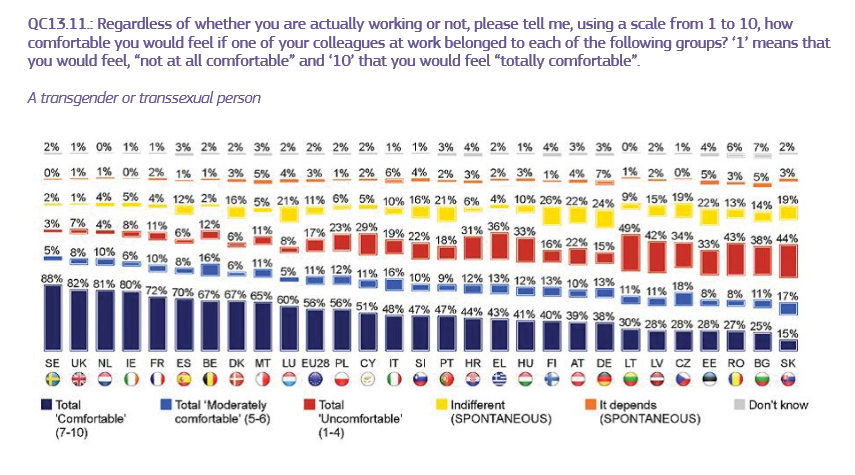 Despite the anxiety they have wrestled with and abuse they have endured, the three transgender women spoke openly about their experiences and were at ease as they shared their stories.

Kellie Maloney, always so animated and intense as the loud-mouthed, wise-cracking Frank,exuded tranquillity sitting in her home in London, while Franken frequently made fun of herself as she expressed her satisfaction at performing comedy as a woman.

“Performing now is more rewarding, it feels like I get to have my cake and eat it too,” Franken said, naturally adopting various quirky characters and accents during the interview.

Former submarine captain Remø has ardently campaigned for transgender rights in Norway and Europe, where many nations require transgender people to undergo genital removal surgery and sterilization before they can legally change gender.

Though tenacious and full of conviction in her fight for legal equality, Remø’s relief to be living as a woman after concealing her identity for some 60 years was almost palpable.

While mainstream acceptance of transgender people is in its infancy, laws across the world are lagging behind, and discrimination and violence towards the LGBT community remain rife, transgender rights are garnering global attention.

Like most transgender individuals, campaigners and organisations, Franken, Maloney and Remø acknowledge that there is still a long way to go in the fight for transgender equality.

But through the courage and honesty of coming out and speaking out, and happiness of living as their true gender, these transgender women have opened the door for others.

From the macho-dominated field of sport to the unforgiving world of entertainment, these members of the transgender community have given hope to generations of people who have struggled with their identity and hidden their true selves.

Have you read?
The real cost of LGBT discrimination
My 30 years of being out and proud in leadership
Talk from the top isn’t enough. We need visible LGBT leaders

Marian Croak on what it takes to innovate, why kids are an inspiration and how not fitting in can be an advantage.

By embracing stakeholder capitalism we will break down the barriers that prevent women from fully participating in the economy and revive the middle class.

The state of women’s leadership in 5 statistics

Are countries doing enough to support women through the pandemic?