Why Commonwealth countries need to wake up to LGBT rights

In the majority of commonwealth member states, LGBTI (lesbian, gay, bisexual, transsexual and intersex) people are criminalized. Penal codes dating back to the colonial era are still making daily life a misery for LGBTI people in the countries that used to make up the British Empire.

From Bangladesh to Barbados, LGBTI people face violence, discrimination and significant barriers in accessing their rights to health, employment and education. Of the 53 Commonwealth member states, 40 continue to criminalise same-sex activity. More than 90% of Commonwealth citizens live in a jurisdiction where LGBTI people are criminalised. 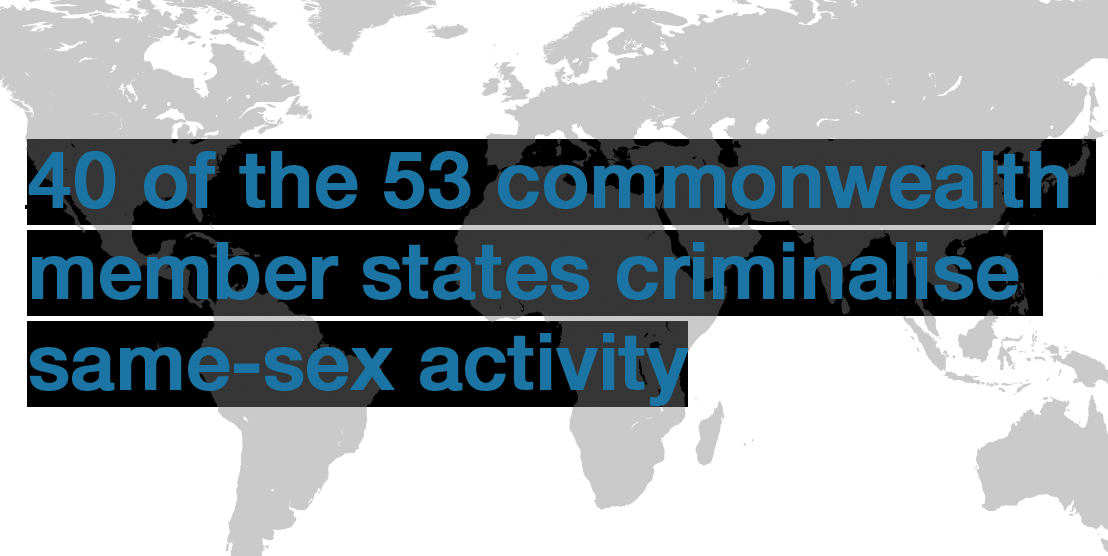 Since the last meeting of Commonwealth leaders in 2013 there have been incremental changes for LGBTI people living in Commonwealth member states. Mozambique revised its colonial era penal code such that same-sex intimacy is no longer illegal. Malta introduced a law that established rights for transgender and intersex people.

Stigma, discrimination, abuse and violence are part of my daily life. It is not safe for me to walk around freely in my own country. My voice has not been heard when fronted up at the police station. I am not utilising my rights as a human because I am in fear.

Some informants preferred to remain anonymous given their perilous situation. A gay man living in Dominica said

My safety would be my biggest concern…there have been a few acts (of violence) on LGBT members, they were just attacked because they looked at somebody funny, or give a funny stare, they’ve been pelted with stone, or chased. I just don’t feel safe walking in town.

The report demonstrates that the discriminatory views people hold are echoed and reinforced by public institutions. Pang Khee Teik, co-founder of Seksualiti Merdeka, an LGBTI community group in Malaysia, said

Our challenge remains in reaching out to poorer LGBTs, LGBT teens, and LGBTs in rural Malaysia who are being bullied by peers, punished by teachers, abandoned by parents, and harassed by authorities.

During the period in 2014 when an anti-homosexuality bill briefly came into force in Uganda, a police raid on a HIV centre which helped LGBT people resulted in a decline in access to health services because clients feared arrest or harassment for seeking care.

Discrimination also has a negative impact on LGBT people’s ability to find work. An informant from Rwanda told us:

Many people think we are useless… Some of us cannot even get jobs just because of our sexuality.

Despite all these obstacles, a picture also emerges of the extraordinary resilience of individual activists and the growing strength of human rights advocacy and LGBTI movements in Commonwealth countries.

Despite the many hardships, trials and struggles we face as individuals, as an organization and as a community Barbados has a tremendously resilient set of LGBTI people that make an invaluable contribution to Barbadian society.

In a country where the whole concept of sex and sexuality is a taboo, we are learning to navigate our ways by highlighting love as the centre of all, a human right that can’t be denied, hoping for broader acceptance some day!

There were hopeful signs at the recent Commonwealth Heads of Government Meeting (CHOGM) in Malta that the Commonwealth is willing to improve this poor record.

Committed to equality and human rights for all, without discrimination on any grounds, we embrace difference, and that includes sexual identity. Discrimination and criminalisation in any form on grounds of sexual orientation is incompatible with our Commonwealth values.

For the first time in its history, the People’s Forum hosted two sessions examining the challenges facing LGBTI people. Policy-makers, including a minister from the UK Department for International Development and the Maltese Civil Liberties minister, joined activists to consider ways in which Commonwealth institutions and member states could do more to protect the rights of LGBTI people. In another session, leaders from across the Commonwealth reflected on the major challenges they face in their national contexts. The first ever Commonwealth Women’s Forum urged that “the gender agenda of the Commonwealth advances…to end all forms of discrimination including, sexual orientation.”

During the first ever open debate in advance of the election of the new Secretary General, candidates were asked how they would advance the rights of LGBTI people. Baroness Patricia Scotland, the new Secretary-General elect, focused on helping member states understand that there is:

…direct correlation between the human capacity, social development in a country and its wealth and long term stability: we cannot deny our individual citizens the right to explore the delights of their real character.

Following her election, Baroness Scotland indicated she would work include LGBTI concerns in the next formal meeting in early 2018. For those struggling with daily prejudice and fear, change cannot come soon enough. We will continue amplifying the voices of LGBTI people throughout the Commonwealth and work with stakeholders towards lasting change.

Author: John Fingleton is Chair of the Board of Trustees at the Kaleidoscope Trust. Speaking Out 2015: the rights of LGBTI people across the Commonwealth is available here.

This is part of a Agenda in Focus collection of views on LGBT rights.

Image: A man walks on a bridge over Kamlapur railway station in Dhaka May 11, 2009. REUTERS/Andrew Biraj