Which countries are in ecological debt?

Last Thursday, August 13th, humanity used up nature’s budget for the entire year, in what environmental think-tank Global Footprint Network (GFN) calls Earth Overshoot Day – the date when humanity’s annual demand on nature exceeds what the earth can regenerate in that year.

Earth Overshoot Day has moved from early month October (in 2000) to August 13th this year – two months earlier – indicating that human activities are putting ever more pressure on the earth.

Carbon emissions are the greatest human-generated demand on nature, GFN says, making up more than half of humanity’s ecological footprint.

“The costs of this ecological overspending are becoming more evident by the day, in the form of deforestation, drought, water scarcity, erosion, biodiversity loss and the buildup of carbon dioxide in the atmosphere,” the statement from GFN indicates.

The human race’s demand on nature first exceeded the earth’s yearly ability to meet that demand – termed biocapacity – in 1970, and has been growing ever since.

The Ecological Footprint is the area of land and water it takes for a human population to generate the renewable resources it consumes, and to absorb the corresponding waste it generates, using prevailing technology. In other words, it measures the “quantity of nature” that we use and compares it with how much “nature” we actually have.

On the other hand, biocapacity is the capacity of biosphere to regenerate and provide for life, on current demand trends. It compares the material metabolism of human economies with what nature can renew.

Africa is “good” to Mother Earth

GFN uses the unit “global hectare” to measure ecological footprint and biocapacity, which is a biologically productive hectare with world average productivity. Because each unit of space has a different regenerative capacity, when expressed as global hectares it is adjusted proportionally to its biological capacity.

Under these measures, Africa is balancing on a knife’s edge, according to the latest data, with the human ecological footprint just about equal with the continent’s biocapacity, measured in per capita terms. 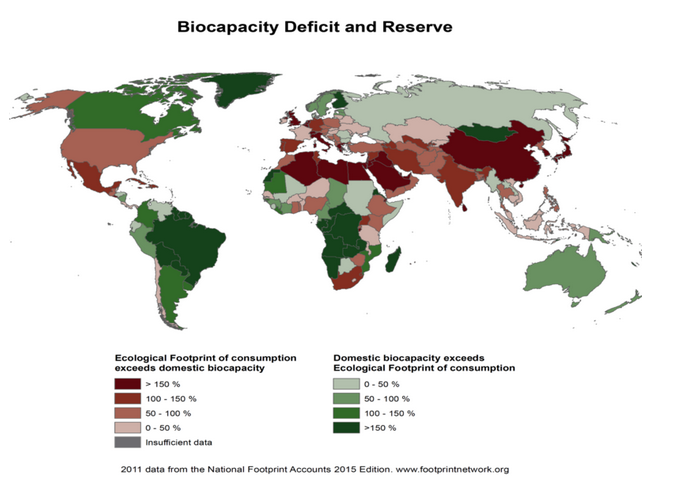 If the whole world used its land, water and energy resources the way the average African does, it would take 70% of the current earth to sustain us all – meaning that there is a surplus left over.

By contrast, if the whole world used its land the way the average North American does, it would take 3.9 Earths to sustain us all, the GFN data shows.

But the “good” African average masks huge disparities among countries. North Africa and the continent’s island nations have particularly large ecological footprints, as a result of relatively high per capita incomes – translating into more energy consumption and larger carbon emissions – but almost zero forest cover, which means that there isn’t any opportunity to recycle carbon through photosynthesis in plants and trees.

Instead, these countries are net contributors to global carbon dioxide build-up, and environmental degradation.

Mauritius overshot its biocapacity around 1975, and consumption has been growing ever since. (Photo/GFN).

The same goes for countries like Egypt, Algeria and Libya, whose human pressures on the environment – largely carbon emissions and demand for cropland – exceeds what those countries can support.

In real terms, the consumption habits of Libyans require the equivalent of 3.3 Libyas to support; for Egypt, it’s 3.2; and Algeria, 3.1.

Libya exceeded its biocapacity in 1972. (Photo/GFN).

The countries with the lowest human pressures on the environment are mostly in central Africa, thanks to the region’s thick forests, and, in some areas, sparse population.

Gabon has the highest “ecological surplus” relative to its population and human demand on the environment. With just 1.6 million people and extensive forest cover, the country is currently using only a tenth of its biocapacity.

Gabon has a large surplus biocapacity, but has been falling in per capita terms as population increases. (Photo/GFN).

The same goes for the Central African Republic and Congo-Brazzaville, both of which have a relatively small population of 4 million people, who are largely rural, which means they have a modest consumption of heavily carbon-polluting fuels such as coal, oil and gas.

Although the Democratic Republic of Congo (DRC) also has a large forest cover, its population of 63 million puts more pressure on the country’s ecological reserves; on current consumption trends the country is using 20% of its biocapacity.

The big disparities between the countries that have a huge ecological overshoot – such as Mauritius, Cape Verde and all of North Africa – and those that have large reserves – mostly in Central Africa – “cancels out” in Africa’s case, giving it a generally favourable overall picture.

Other African countries fall in the middle, but most have already overshot their ecological biocapacity. Of the 52 countries in Africa with available data, 30 countries are in deficit.

Burundi, Djibouti, South Africa, Swaziland, Tunisia, Kenya and Uganda are in a particularly bad place, either because of high per capita carbon emissions, or population pressure and demand for crop and grazing land.

Uganda’s ecological footprint has consistently exceeded biocapacity in the past 50 years. (Photo/GFN).

These countries are already using up at least twice as much natural resources as their countries are able to regenerate in a year. If Africa ever suffers ecological collapse, it will likely to happen first in these countries – particularly the lower income ones that have lower financial capacity to adapt to the new harsh economic reality.

Today, there are just 22 countries that are currently holding an “ecological surplus” and they might be the countries of refuge in the next few decades; before long, they might find themselves hosting environmental refugees.

If you are a smart African government watching your biocapacity dwindle, and are neighbours with one of these “reserve” countries, you will do well to support regional integration and free movement of people today – in a few years, you might need to move there.

Assuming global carbon emissions are reduced by at least 30% below today’s levels by 2030, Earth Overshoot Day could be moved back on the calendar to September 16, 2030 assuming the rest of the Footprint would continue to expand at the current rate, according to Global Footprint Network.

But if business continues as usual, the world would be using the resources equivalent to two Earths by 2030, with Earth Overshoot Day moving up on the calendar to the end of June.