How can we help farmers adapt to climate change?

A few years ago, Melinda and I visited with a group of rice farmers in Bihar, India, one of the most flood-prone regions of the country. All of them were extremely poor and depended on the rice they grew to feed and support their families. When the monsoon rains arrived each year, the rivers would swell, threatening to flood their farms and ruin their crops. Still, they were willing to bet everything on the chance that their farm would be spared. It was a gamble they often lost. Their crops ruined, they would flee to the cities in search of odd jobs to feed their families. By the next year, however, they would return – often poorer than when they left – ready to plant again.

Our visit was a powerful reminder that for the world’s poorest farmers, life is a high-wire act – without safety nets. They don’t have access to improved seeds, fertilizer, irrigation systems, and other beneficial technologies, as farmers in rich countries do – and no crop insurance, either, to protect themselves against losses. Just one stroke of bad fortune – a drought, a flood, or an illness – is enough for them to tumble deeper into poverty and hunger.

Now, climate change is set to add a fresh layer of risk to their lives. Rising temperatures in the decades ahead will lead to major disruptions in agriculture, particularly in tropical zones. Crops won’t grow because of too little rain or too much rain. Pests will thrive in the warmer climate and destroy crops.

Farmers in wealthier countries will experience changes, too. But they have the tools and supports to manage these risks. The world’s poorest farmers show up for work each day for the most part empty-handed. That’s why of all the people who will suffer from climate change, they are likely to suffer the most.

Poor farmers will feel the sting of these changes at the same time the world needs their help to feed a growing population. By 2050, global food demand is expected to increase by 60%. Declining harvests would strain the global food system, increasing hunger and eroding the tremendous progress the world has made against poverty over the last half-century.

I’m optimistic that we can avoid the worst impacts of climate change and feed the world – if we act now. There’s an urgent need for governments to invest in new clean-energy innovations that will dramatically reduce greenhouse-gas emissions and halt rising temperatures. At the same time, we need to recognize that it’s already too late to stop all of the impacts of hotter temperatures. Even if the world discovered a cheap, clean energy source next week, it would take time for it to kick its fossil fuel-powered habits and shift to a carbon-free future. That’s why it’s critical for the world to invest in efforts to help the poorest adapt. 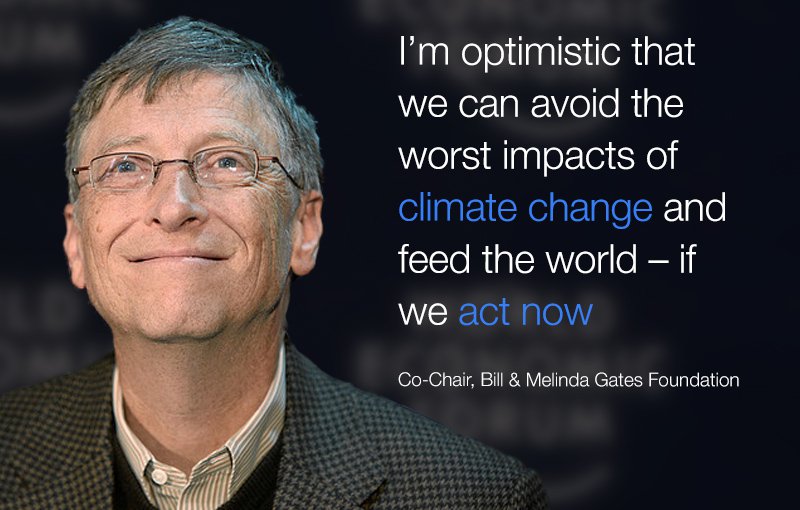 Many of the tools they’ll need are quite basic – things that they need anyway to grow more food and earn more income: access to financing, better seeds, fertilizer, training, and markets where they can sell what they grow.

Other tools are new and tailored to the demands of a changing climate. The Gates Foundation and its partners have worked together to develop new varieties of seeds that grow even during times of drought or flooding. The rice farmers I met in Bihar, for instance, are now growing a new variety of flood-tolerant rice – nicknamed “scuba” rice – that can survive two weeks underwater. They are already prepared if shifts in the weather pattern bring more flooding to their region. Other rice varieties are being developed that can withstand drought, heat, cold, and soil problems like high salt contamination.

All of these efforts have the power to transform lives. It’s quite common to see these farmers double or triple their harvests and their incomes when they have access to the advances farmers in the rich world take for granted. This new prosperity allows them to improve their diets, invest in their farms, and send their children to school. It also pulls their lives back from the razor’s edge, giving them a sense of security even if they have a bad harvest.

There will also be threats from climate change that we can’t foresee. To be prepared, the world needs to accelerate research into seeds and supports for smallholder farmers. One of the most exciting innovations to help farmers is satellite technology. In Africa, researchers are using satellite images to create detailed soil maps, which can inform farmers about what varieties will thrive on their land.

Still, a better seed or a new technology can’t transform the lives of farming families until it’s in their hands. A number of organizations, including a non-profit group called One Acre Fund, are finding ways to ensure that farmers take advantage of these solutions. One Acre Fund works closely with more than 200,000 African farmers, providing access to financing, tools, and training. By 2020, they aim to reach one million farmers.

In this year’s Annual Letter, Melinda and I made a bet that Africa will be able to feed itself in the next 15 years. Even with the risks of climate change, that’s a bet I stand by.

Yes, poor farmers have it tough. Their lives are puzzles with so many pieces to get right – from planting the right seeds and using the correct fertilizer to getting training and having a place to sell their harvest. If just one piece falls out of place, their lives can fall apart.

I know the world has what it takes to help put those pieces in place for both the challenges they face today and the ones they’ll face tomorrow. Most importantly, I know the farmers do, too.

Author: Bill Gates, Founder and Technology Adviser of the Microsoft Corporation, is Co-Chair of the Bill & Melinda Gates Foundation.

Image: Farmers plant saplings in a rice field on the outskirts of Srinagar June 10, 2015. REUTERS/Danish Ismail

Young farmers in Punjab are turning to millet as it is a heat tolerant crop that doesn't need much water to grow. But yields are six times lower than rice.

Electric car supplies are running out. What does it mean for net-zero targets?

Deserts are getting hotter and bigger. Protecting the 'biocrust' can prevent them spreading

Circular economy is key to accelerating net-zero transportation. Here's how