How does Myanmar’s election work?

This article is published in collaboration with Thomson Reuters.

Myanmar voted on Sunday in the first free national election for 25 years. More than 6,000 candidates competed for 1,171 seats in the national parliament and local assemblies.

The party of opposition leader Aung San Suu Kyi was on course for a landslide victory, but it was unclear if that would be enough to deliver a majority in parliament that would allow her National League for Democracy to control the presidency.

The period before a new president takes power at the end of March is likely to be one of tension and uncertainty, as Suu Kyi negotiates how to share power with the still-dominant military.

Below are some details on the results and transition.

The Union Electoral Commission (UEC) plans to announce preliminary nationwide results on Nov. 10, and final results no later than two weeks after the vote.

The commission is making rolling announcements of results by constituency as they come in from around the country on Nov. 9.

The first batch of results announced on Monday returned 12 out of 12 seats in the lower house to the NLD, all in Yangon.

Results from the urban centres, the support bases for the NLD, were expected to come more quickly than those from the rural support base of the ruling Union Solidarity and Development Party (USDP).

Myanmar has a first-past-the-post voting system, likely to favour the NLD.

The 2008 constitution, drafted by the junta that handed power to President Thein Sein in 2011, reserves a quarter of all seats in parliament for the military.

There are 440 seats in the lower house. 110 of them are reserved for the military.

There are 224 seats in the upper House. 56 of them are reserved for the military.

There are also 14 legislatures for the regions and states of Myanmar.

Myanmar’s president is elected by parliament, not by popular vote.

The vote on the presidency will take place after the new members take their seats in both houses in February. The president will assume power by the end of March.

The president forms a cabinet, but the military controls three of the most powerful ministries. They are the interior, defence and border security ministries. 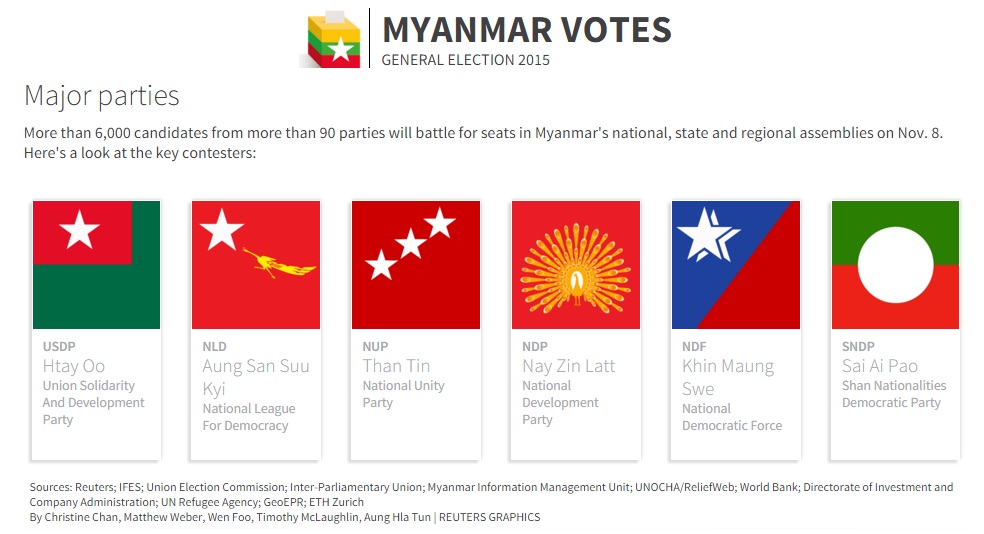 Set up under military rule, the USDP is packed with former junta members and powerful tycoons keen on maintaining close ties with a new government that is likely to press ahead with privatisation.

President Thein Sein consolidated his position ahead of the election by removing the powerful parliamentary speaker from the party’s leadership. Although not standing for election himself, Thein Sein could be re-elected if put forward as a candidate.

The USDP won more than 75 percent of all contested seats in a 2010 general election, widely condemned as rigged. In by-elections in 2012, contested by the NLD, it won one seat.

Myanmar’s largest opposition party won a 1990 election but the result was ignored by the military. It boycotted the 2010 vote. After Suu Kyi’s release from house arrest in late 2010, it took part in by-elections in 2012, winning 43 of 44 seats contested.

Whether the NLD will have enough seats to elect its candidate president is unclear.

She has come under fire for not including Muslims as candidates, not nurturing strong party leaders and for being vague about how the NLD would govern.

Perhaps the most influential of various ethnic minority parties, Shan parties are pushing for amendment of the constitution and more autonomy for their state. Shan people are the second-biggest ethnic group after majority Burmans, with about 6 million people inhabiting Shan State.

Both are fielding candidates outside Shan State, including in constituencies in the cities of Yangon and Mandalay.

Two parties in Rakhine State merged to set up the ANP in 2014, tapping anti-Muslim sentiment after sectarian violence in 2012.

The hardline Buddhist party has campaigned to disenfranchise hundreds of thousands of Rohingya voters and lobbied to exclude Rohingya candidates from the election.

The party has 77 candidates, including 63 in Rakhine State, and looks likely to win all those seats, which would make it a major force in the state and one of the most powerful minority parties in the national assembly. (Compiled by the Yangon newsroom)

Image: A general view of the city is seen, with an illuminated Sule Pagoda standing out from amongst the other buildings, in central Yangon, Myanmar. REUTERS/Soe Zeya Tun.

Davos 2022: How to properly debate the future of democracy

A lively panel gathered on the first day of Davos to discuss the future of democracy, demonstrating exactly the sort of healthy debate required to nourish it.

Davos 2022: 4 leaders on the future of civic participation

Ahead of Davos, leaders from Habitat for Humanity, DataKind, Reporters Without Borders and the World Resources Institute share their thoughts on civic participation.

Can science help us understand populism, from 'malignant manicheism' to Marine Le Pen?