The 9/11 al Qaeda attack on the World Trade Centre twin towers – soaring symbols of development and progress – was not a random choice. In 2004, Osama bin Laden said in a taped speech, “We are continuing this policy in bleeding America to the point of bankruptcy. Every dollar of al Qaeda defeated a million dollars [spent by the US], including the “loss of a huge number of jobs”.

And now, as the international community responds to ISIS’s brutal conquest of large swaths of territory in Iraq and Syria, it is important to remember its socio-economic context. The Iraqi public’s chief concern in the years leading up to the ISIS offensive was unemployment, according to this Pew survey from 2012. 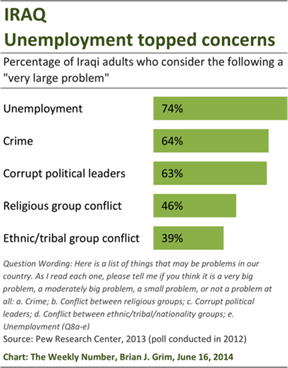 Indeed, the lack of jobs arguably softened the ground for ISIS’ sudden advance. Although a poor economy does not cause violent extremism, it can contribute to the conditions that terrorists can exploit.

So, if violent extremists provoke and take advantage of a bad economy to sow seeds of religious discord and violence, could peacemakers use good businesses to stimulate economic growth and foster interfaith understanding and peace?

One world leader did just that. In September 2013, United Nations Secretary-General Ban Ki-moon set up the Business for Peace platform to harness the largely untapped potential of businesses to bring peace while they grow their bottom lines. Because businesses are at the crossroads of culture, commerce and creativity, they have the resources and incentive to make the world more peaceful.

That’s the theory, but what about the practice?

A new set of case studies published by the UN Global Compact and the Religious Freedom & Business Foundation shows that the theory has some legs. Businesses in various parts of the world are addressing prejudices that feed violent extremism and terrorism. Although no single initiative is a magic bullet to end all such violence, taken together they offer a glimpse into the peacemaking potential of business. The initiatives include:

1. Using marketing to cross borders: companies can make positive contributions to peace by mobilizing advertising campaigns that bring people of various faiths and backgrounds together, as seen in Coke Small World campaigns. One of their marketing initiatives, for instance, linked people in Pakistan and India through Coca-Cola vending machines equipped with live video feeds. (Documented in a three-minute video worth watching.)

2. Rewarding intercultural understanding: cross-cultural dialogue and cooperation is an essential part of the daily operations for multinational companies, such as BMW. In collaboration with the UN Alliance of Civilizations, the BMW Group offers an annual award for organizations that create innovative approaches to intercultural understanding, including interfaith understanding and peace. Among organizations that have won this award is a tour company in the Middle East, which offers new ideas to build bridges and bring cultures together through collaborative Muslim-Jewish tourism in the Holy Lands.

3. Supporting social entrepreneurs: the business environment provides neutral ground for religious differences to give way to shared concerns of enterprise and economic development. For example, the Yola Innovation Machine in Adamawa State, Nigeria, supports companies and new entrepreneurs in conflict-affected areas to reduce extremism. Similarly, Petrobras in Brazil supports business incubation for Afro-Brazilians, creating models for how small enterprises can have a significant impact in empowering members of marginalized ethno-religious communities, including a focus on women’s empowerment.

4. Boosting workforce diversity: when businesses are sensitive to the religious and cultural issues around them, they not only make reasonable accommodations for faith in the workplace, but they can also address difficult unmet social needs. Businesses in Indonesia did this by organizing a mass wedding for interfaith couples who had lived without legal status and with no ready means to become legitimately wed. By obtaining legal status, thousands of interfaith couples can now access the public health service, obtain education for their children, and have expanded opportunities for employment.

However, the peacemaking potential of business is largely unreported, unstudied and untapped. More research and incentivizing programmes would help change that.

First, we need to have a fuller picture of the range, impact and effectiveness of business initiatives to support interfaith understanding and peace. This includes more cases studies showing the multifaceted benefits of these initiatives. For instance, Coca-Cola’s India-Pakistan campaign not only sold more cans of Coke and increased intercultural understanding, but it also created new video technologies that enabled people to virtually touch hands and see each other eye to eye.

And second, we need to increase positive incentivization of “double bottom line” enterprises that do social good and make a profit. Possibilities include giving a higher profile to the global programmes like the Business for Peace Foundation that bestows awards for such initiatives, and multiplying programmes that facilitate practical knowledge of impact investment, such as the Impact Bond Fund and Impact Investment Programme at the Saïd Business School, Oxford University.

Increasing such knowledge and incentives can inspire and give resources to a new generation of socially conscious business entrepreneurs and peacemakers.

Author: Brian J. Grim is the president of Religious Freedom & Business Foundation and a member of the World Economic Forum’s Global Agenda Council on the Role of Faith.

Image: A woman works at the General Company for Leather Industry in Baghdad, July 2, 2011. REUTERS/Saad Shalash