How do currency unions affect trade?

Economic and Monetary Union in Europe (EMU) has recently been the source of a lot of pain. EMU’s benefits – particularly economic benefits – often seem a lot harder to see and measure. Since monetary union reduces transactions costs between its members, it could, in principle, stimulate trade. Has it? There has been considerable dispute concerning the size, if any, of this trade-stimulating effect of EMU, or indeed of the effect of any currency union on trade. In their recent survey of the literature, Head and Mayer (2014) write:

“The trade eﬀects of common currencies have been the subject of controversy. Our mean over 104 estimates is 0.79, which corresponds to a doubling of trade. This is substantially smaller than initial estimates by Rose (2000) who put the currency union coeﬃcient at 1.21, implying more than tripling trade. However, the meta-analysis average is substantially larger than the preferred estimates of some recent work. Baldwin (2006), synthesising a stream of papers focusing mainly on the Euro, puts the currency eﬀect at about 30%. Santos Silva and Tenreyro (2010) ﬁnd virtually no eﬀects on trade for the Euro, after taking account the high level of trade integration of Eurozone members even before they formed a common currency. Berthou and Fontagné (2012) use ﬁrm-level exports by French ﬁrms and ﬁnd a weakly signiﬁcant 5% eﬀect, coming mostly from average exports by the most productive ﬁrms. Frankel (2010) ﬁnds a more optimistic 15% increase of trade that takes about 5 years to take place, and then stabilises.”

As some of the early contributors to this work, we bear much responsibility for this situation. In ourEuropean Economic Review (2002) paper, we used pre-1998 data to estimate the effect of currency unions on trade using (then-) conventional gravity models. We concluded:

It seems an appropriate time to reconsider our earlier opinions. We now have 15 years of data on the currency union that people care most about, EMU; there have also been considerable methodological advances.1 Are our critics correct in assessing the EMU effect on trade as small?

In our recent work (Glick and Rose 2015), we take advantage of data from the EMU period to ask three questions. Each of these is geared towards questioning the results of our earlier work, which sparked such controversy.

Our second question is related. Does EMU have a trade effect similar to that of other currency unions? Our (2002) paper included no data on EMU, so we were cautious about the relevance of pre-1998 data for EMU:

“Caveats. There are issues associated with the applicability of our results. Since our sample ends before EMU, most of the currency unions involved countries that were either small, poor, or both; our results may therefore be inapplicable to EMU.”

Finally, we ask whether the (many) advances in empirical modelling of trade flows since our (2002) paper are materially relevant to estimating the currency union effect on trade. We worked hard in our earlier work to ensure that our results did not depend strongly on our precise methodology. For instance we wrote (highlights added):

“To summarise: a number of different panel estimators all deliver the conclusion that currency union has a strong positive effect on trade.  … Our fixed effects estimates indicate that entry into/departure from a currency union leads bilateral trade to approximately double/halve, holding a host of other features constant. This result is not only economically and statistically significant, but seems relatively robust…”

“This result is economically large, statistically significant, and seems insensitive to a number of perturbations in our methodology.”

The last dozen years has seen much methodological work in the area, perhaps most importantly the contributions of Anderson and van Wincoop (2003) and Santos Silva and Tenreyro (2006). We take advantage of this progress by estimating the effect of currency union on trade using newer techniques

We have three findings, one of sweet, and two of sour. Happily, our symmetry assumption between currency union entries and exits looks OK. Unfortunately, it is also weak, uninteresting, and undermined by other results. More importantly, we find that the trade effects of EMU are different from other currency unions. But, most disturbingly, we find that the precise econometric methodology used to estimate the currency effect on trade matters. A lot. In the large, we find no consistent evidence that EMU stimulated trade. Indeed, we are forced to conclude that econometric methodology matters so much that it undermines confidence in our ability to estimate the effect of currency union on trade.

After fifteen years, what do the data indicate that the effect of currency union has been on international trade? Our results are summarised in Figure 1 which presents point estimates, along with 95% confidence intervals, for four different estimators. We take advantage of our large panel of data, including observations from over 200 countries for 66 years; we also distinguish between a typical currency union effect, and that of EMU.

Suppose that one simply pools the data without any fixed effects; those estimates are shown at the extreme left of Figure 1.2 Those results lead one to conclude that EMU had essentially no effect on trade (the estimate is labelled “EMU, Pooled”), while a typical currency union had an economically and statistically huge effect (“CU, Pooled”). But no one takes such statistical models seriously now. Adding fixed effects is de rigeur; in our (2002) paper, we added dyadic effects that control for any characteristic that is common to a pair of countries and constant over time (such as the distance between the countries, whether they share a common language or border, etc.) Including dyadic fixed effects substantially lowers one’s estimate of the average currency union effect, while simultaneously and significantly raising the effect of EMU. The latter are shown in the middle-left and are both close to the bottom line estimate of .65 in our (2002) paper, as shown by the horizontal line in the figure. This is a big effect; an estimate of .65 implies a trade-expanding effect of (e.65-1 ≈) 92%. So far, so good.

Figure 1. Different estimates of the trade effects of currency unions

Still, life has moved on in the past fifteen years, and these trade models are no longer respectable. Switching to a more modern model of exports with time-varying country fixed effects again changes the conclusion; the estimates are presented in the middle-right. Those estimates imply that the EMU has an enormous negative effect on exports, while other currency unions have a big positive effect. Confused yet? Wait, there’s more. Adding dyadic fixed effects to this model – something that the data like – lowers the currency union effect but leaves it positive and significant, while indicating that EMU has an even larger positive effect on exports. These last estimates, advocated by Baldwin and Taglioni (2007) appear at the right-hand side of Figure 1.3 If one takes Baldwin and Taglioni seriously – and who can’t? – then currency union boosts exports by 35% (since e.30-1 = .35), and EMU has had an even larger effect.

But we’re not done yet. Even more sophisticated estimation using the Poisson estimator advocated by Santos Silva and Tenreyro (2006) seems reasonable, given many features of the data such as missing or zero trade observations. Poisson estimation is beyond our capacity for the full panel of data, but is easy enough to estimate year by year in the cross-section. We present Poisson results in Figure 2, along with analogous least squares estimates (all include a full set of exporter and importer fixed effects as well as gravity controls). Disturbingly, the Poisson estimates for the currency union effect on exports wander a lot over time and rarely overlap with their more stable least squares counterparts; indeed, they are frequently of different signs in the latter part of the sample period!4 The same is true of their EMU counterparts presented in the bottom panel; the Poisson estimates average .27, an order of magnitude smaller than their least squares analogues, and are differently signed! The fact that the precise econometric methodology matters a lot is a strong and disturbing result of our analysis that undermines any positive findings.

Figure 2. Cross-sectional estimates of the currency union effect on exports 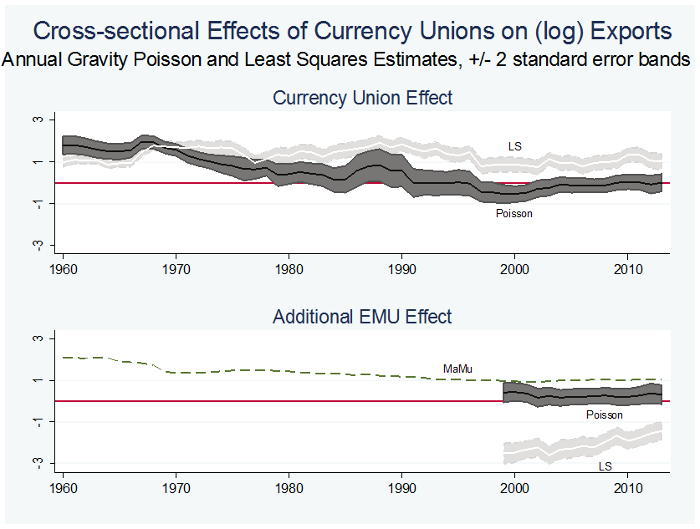 Are you confused? We are. We’ve presented results for a number of different estimators, essentially in increasing order of plausibility and scientific respectability. We end up with an estimator that suggests EMU has at least a mildly stimulating effect on exports. If forced to make a quantitative assessment, that’s what we would conclude. However, the switches and reversals across methodologies make us nervous of any bold statements. So our bottom line is simple. We conclude that it is currently beyond our ability to estimate the aggregate trade effect of currency unions, particularly EMU, with any confidence.

1 We are also older, if not wiser; just ask our kids.

2 Time fixed effects and other conventional gravity controls (such as distance, output, language, etc.) are always included in the statistical models.

3 Over 55,000 fixed effects are embedded in the estimates at the extreme right of Figure 1.

4 Figure 2 also includes the annual estimate of the “MaMu” statistic recommended by Head and Mayer (2014); it varies over the period but is usually close to unity, indicating Poisson estimation is efficient.

How banks can help companies restructure for growth

The banking industry has to walk the tightrope of balancing relief with financial responsibility.

The pandemic's disruption creates an opportunity to harness digital to deliver citizen-centric finance – and deliver the Sustainable Development Goals.