Which economies have the most developed financial systems?

Hong Kong’s financial system is the best in the world for supporting economic competitiveness and growth, according to the World Economic Forum’s Global Competiveness Report 2014-2015.

The report evaluates the level of development of 144 of the world’s financial systems, based on their efficiency and levels of trustworthiness and confidence, as part of its overall competitiveness ranking. 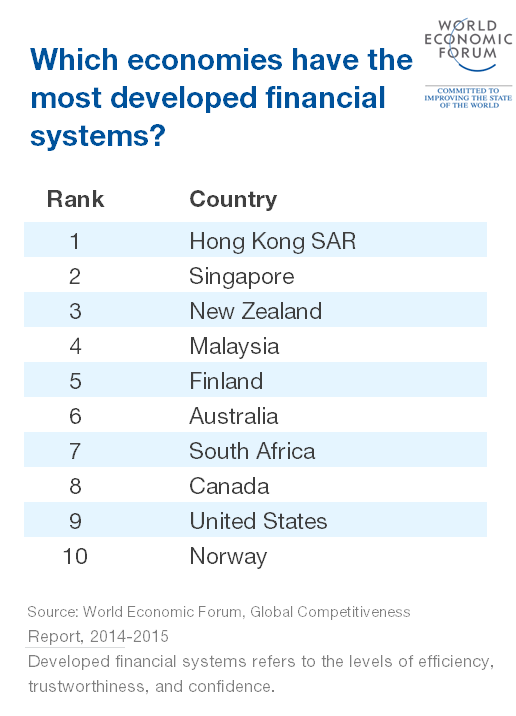 The Asia-Pacific region performs strongly, with Singapore, New Zealand, Malaysia and Australia all appearing in the top 10 alongside Hong Kong.

Finland, South Africa, Canada, the US and Norway complete the ranking.

The data for this measure is taken from a number of sources including the World Economic Forum Executive Opinion Survey and the World Bank/International Finance Corporation’s Doing Business 2014: Understanding Regulations for Small and Medium-Size Enterprises report.

If you’d like to learn more, read the Global Competitiveness Report and 10 ways countries can improve their competitiveness.

Image: Joggers run past as the skyline of Singapore’s financial district is seen in the background. REUTERS/Edgar Su.