Where is income inequality actually falling?

Speeches by politicians on inequality tend to be short on facts and long on ideological assertion. In developing and emerging economies, one charitable explanation for the poor quality of public discourse about income inequality is that data on income distribution are often unavailable or dubious. On this most important of subjects, debates tend to generate more heat than light.

A new set of studies could help put an end to all that. Led by Nora Lustig, a professor of economics who specializes in Latin America, a team at Tulane University’s Commitment to Equity Institute created comprehensive databases on both the state of income distribution and the effects of government policies on that distribution. Crucially, the figures are comparable across a large set of middle- and low-income countries and also with data available for advanced countries. Preliminary conclusions emerging from these studies will illuminate political debates – and likely annoy ideologues of both the right and the left.

Start, Lustig argues in a recent paper, with the fact that world income inequality is not rising. Consider the Gini coefficient, the most common measure of inequality, which runs from a value of zero for perfect equality to 100 for perfect inequality (one person receives all the income). The average Gini score (not weighted by population) in countries for which there are data declined slightly in the 2000-2010 period, from 39 to 38.

Yes, the score rose in rich countries over the same period – from 29.8 to 30.4. But it fell precipitously in Latin America, from a scandalous 55.1 in 2000 – which made the continent the world’s most unequal region – to a still-very-high 50.2 a decade later. The Gini score also dropped in South Asia. In Sub-Saharan Africa, where data are more fragile, it seems to have remained roughly constant. 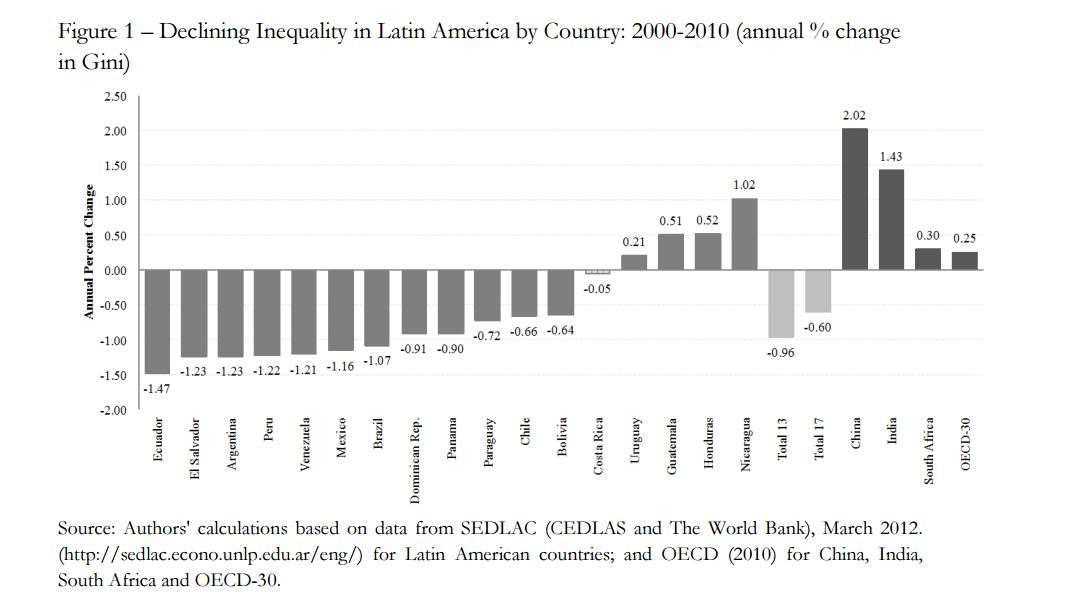 Moreover, inequality seems to be dropping precisely where it was most acute to begin with. This is true both for regions, particularly Latin America, and for countries, such as Brazil and South Africa.

So the often-heard assertion that rising inequality is the central economic fact of our times is probably due to a disparity of a different kind: the outsize impact of rich-country pundits and news outlets on international debates.

Another set of findings is sure to upset zealots from the right: tax-and-transfer schemes can have, and are having, a significant impact in reducing inequality. In one comparison of middle-income countries in Asia, Africa, and Latin America, Lustig shows that Gini coefficients after taxes and transfers (including the cash value of education and health services) are significantly lower than those for initial market incomes.

The average drop for the nine emerging countries – including the still hugely unequal South Africa – that she compares is more than three points (55.7 to 52.5). The same exercise, which treats pensions as deferred consumption and therefore abstracts from the redistributive role of pensions among the older populations of the advanced economies, yields a drop of seven points in the United States and a bit more than nine points in the European Union. So emerging countries are doing better – but could improve considerably.

But this does not mean that activists should demand higher taxes and public spending under all circumstances. The quality of government programs makes a big difference. Brazil has a public sector that is roughly twice the size of Chile’s – total tax revenue is approximately 20% of GDP in the latter and somewhere around 40% (estimates differ) in the former. And social expenditure (again treating pensions as deferred consumption) is also twice as large in Brazil: 16% versus 8% of GDP.

But, according to Lustig, the effect of government redistribution on inequality is the same in both countries: a nearly four-point drop in the Gini score. What Lustig does not explore is that the contrast is even sharper if one recalls that Brazil’s government spends a great deal less than Chile’s on infrastructure, relative to GDP. It is hard to escape the conclusion that some public expenditure in Brazil serves little purpose other than keeping certain political constituencies conveniently quiet.

A case also worth noting is that of Bolivia, where left-wing administrations have significantly expanded social-welfare spending. But, because cash transfers are universal, rather than targeted at the poor, the overall effect is not progressive but neutral, another paper finds.

Crucially, taxes and transfers are not the only way to fight inequality. Earlier work by Lustig and her coauthors found that a declining wage premium – that is, a drop in the wage gap between workers with high and low education – explained part of the decline in the Gini coefficient in Latin American countries. It is not easy to disentangle the role of supply and demand factors in the reduction of the wage premium, but both seem to have played a role.

On the demand side, exchange-rate devaluations made non-traditional exports more competitive and helped boost demand for relatively unskilled labor. On the supply side, a sharp increase in years of schooling, and especially in access to higher education, swelled the ranks of professionals and other skilled workers and helped lower their relative wages.

This is all good for income distribution, but the resulting politics remains fraught. Student activists demanding (along with the rest of society) a fairer distribution of resources may not wish to hear that the growing numbers of professionals often resulted from the rapid and controversial expansion of private – and sometimes for-profit, universities – and that this accounts for part of the drop in inequality.

Similarly, young men and women who worked hard to get to university with the expectation of very high relative compensation are not happy to find that the wages of, say, journalists and psychologists, are rising much more slowly than those of computer technicians or machine operators. Indeed, this frustration is behind (though not always overtly) many of the recent university student protests in Latin America and elsewhere.

So income inequality is bound to prove politically controversial when it is worsening, and also when it tends to decline. Studies like those led by Lustig can illuminate the inevitable controversies, so that they yield better policies rather than simple acrimony.

Author: Andrés Velasco is Professor of Professional Practice in International Development at Columbia University’s School of International and Public Affairs.

Andrés Velasco, Dean of the School of Public Policy, London School of Economics and Political Science

The shock inflicted by the pandemic on the global economy has been more severe and has occurred much faster than any other in recorded economic history.

Unsuited to the new normal? Formal fashion hangs by a thread

IMF: The economics of lockdown